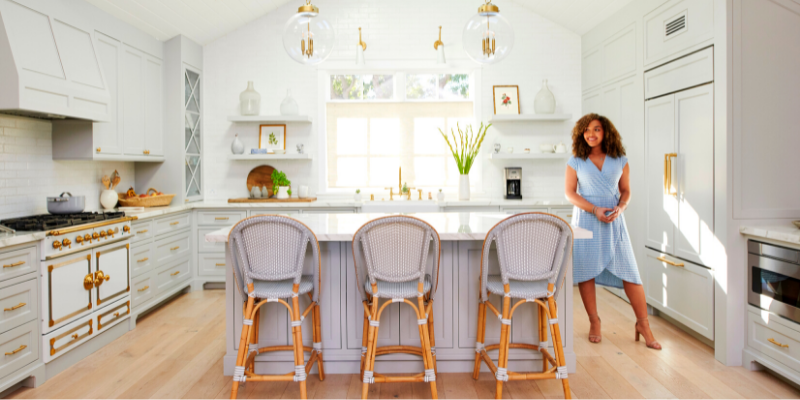 Creating the Stadium Experience in Your Kitchen

For some sports fans, there’s more to the game day experience than the game itself. Sure, it’s great to cheer on your favorite team through a white-knuckle competition, but it’s just as fun to explore the smorgasbord of delicious food that every stadium and arena across America has to offer. Food is a big part of the stadium experience, whether you’re sharing a snack with friends or chowing down on a full meal from the comfort of the stands.

Nachos, chili cheese dogs, cotton candy and pretzels are just some of the classic foods you’ll find spectators noshing on—and don’t forget liquid accompaniments ranging from lemonade to beer. But as tasty as they are, these treats can do a number on your waistline. Fortunately, it’s relatively easy to replicate your favorite game day snacks at home—and with creative and healthy twists—no matter which team you root for.

America’s pastime isn’t complete without a ballpark frank—and that goes double for Chicago Cubs fans, who gobble down Chicago-style hot dogs by the thousands each season. Topped with a garden of veggies—including tomato slices, white onion, pickle relish, sport peppers and a pickle spear—a Chicago dog is a much smarter choice than a chili cheese dog. And with a few simple substitutions—like chicken sausage instead of beef, organic veggies, and whole wheat buns—you won’t feel guilty going back for seconds. Or thirds.

Buffalo, New York is most famous for three things: the Buffalo Bills, the Buffalo Sabres, and the tangy, spicy, bright orange sauce that works so perfectly on chicken wings. Traditionally, buffalo wings should be fried, but grilling is a healthy and delicious alternative (and baking works just as well). Make sure you have a big stack of napkins for this snack, and don’t forget the celery and bleu cheese.

Peanuts are the perfect handheld snack that can feed tons of sports fans with very little effort. Rich in protein, they can be sweet, spicy, salty or sometimes all three. Southern sports fans have a penchant for boiled peanuts, which can be whipped up in a crock pot, while roasted peanuts have universal appeal.

If you’re making fries at home, you might as well kick it up a notch. Northern California is famous for its garlic and, as a result, its garlic fries. So it comes as no surprise that the dish is one of the most popular menu items at San Francisco’s AT&T Stadium, home of the Giants. If you follow this recipe, you won’t even need a deep fryer.

If there’s one thing New York Yankees and New York Mets fans can agree on, it’s that a baseball game isn’t complete without a soft pretzel and a side of spicy mustard. But if you’re gluten intolerant, you often miss out on this handheld treat. Luckily, pretzels are surprisingly easy to make at home—even without the wheat.

Stadium nachos are notorious for their neon yellow cheese sauce and a few other suspicious toppings. At home, you can load up your tortilla chips with whatever you want. Miami fans swear by Cuban-style nachos, which add a Caribbean twist to the traditional recipe by topping gluten-free tortilla chips with slow-cooked pork, ham and a light Swiss cheese sauce.

By the time the seventh-inning stretch rolls around, you’re going to be craving something sweet—that’s the real reason Cracker Jacks are prominently featured in “Take Me Out to the Ball Game.” By substituting sugar with maple syrup, you can make caramel corn that’s as good as the Cracker Jacks you remember from childhood baseball games—but without all the calories (or, sadly, the toy surprise).

After all the hot dogs, peanuts and other snacks, you’re going to need something to quench your thirst. With just three ingredients—lemons, water, and honey—you can make ballpark-park quality lemonade at a fraction of the price.

Once you’ve gathered your snacks and turned on the game, it’s easy to recreate the stadium experience at home. Just gather your favorite sports fans, sit back and dig in.


Adam Young is the founder and CEO of Event Tickets Center. When he’s not cheering on his favorite teams in his hometown of Orlando, he enjoys recreating the experience at home for his family and friends